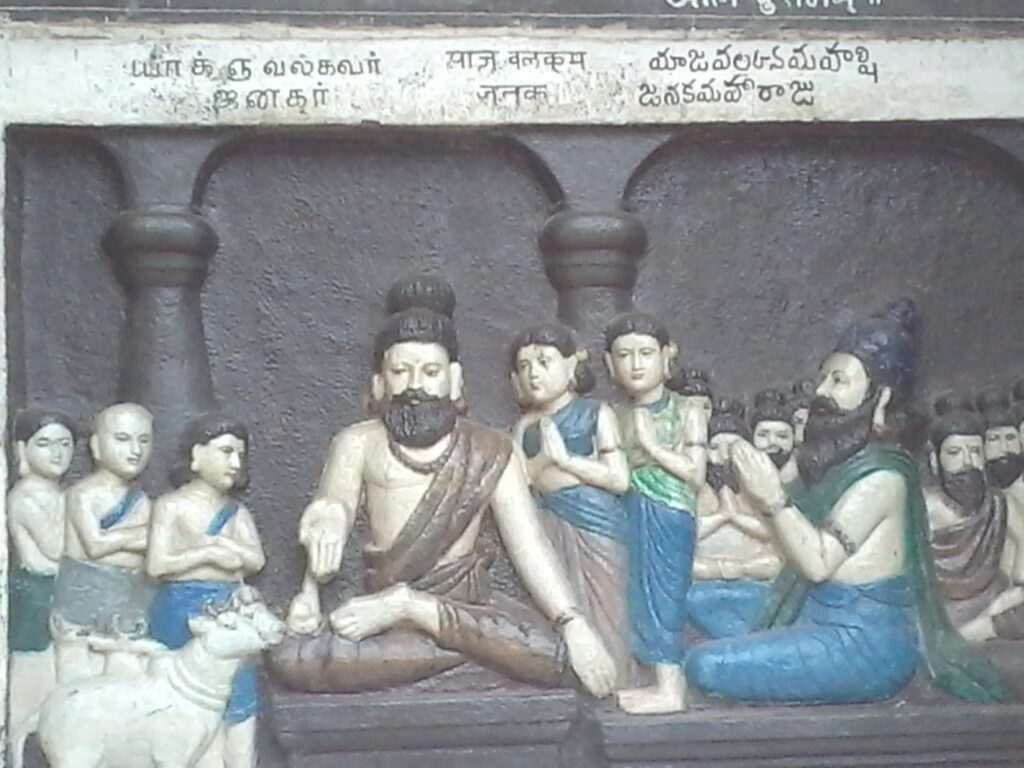 Each Veda contains two sections: Mantras and Brahmanas. Typically, a collection of Mantras is referred to as a Samhita. Currently, and frequently in ancient Hindu tradition as well, the Veda is frequently referred to as the Samhita portion alone. For instance, the term ‘Rigveda’ is frequently used to refer to the Rigveda Samhita.

The Brahmanas have their own titles and are more akin to Vedic theological treatises. Numerous Brahmanas conclude with an esoteric section called the ‘Aranyakas’. Embedded within or at the conclusion of these Aranyakas are profoundly spiritual treatises known as the ‘Upanishads.’ The Upanishads have been the bedrock of Hindu spiritual traditions for several centuries and are held in the highest regard.

The Samaveda, Rigveda, and Atharvaveda all contain distinct Samhita and Brahmana sections. However, in the Yajurveda, there are two distinct types that we will discuss.

The Krishna Yajurveda incorporates Mantras from the Samhita alongside Brahmanas, whereas the Shukla Yajurveda maintains a clear distinction between the two.

Story of Separation from Vishnu Purana

According to the Vishnu Purana, the storey of Yajurveda’s division into two versions.

After compiling the Vedic mantras into the four Samhitas, Veda Vyasa taught them to a large number of disciples, who later established their own shakha (school). He taught the Yajur Veda to his disciple Vaishampayana Vyasa, who then compiled and taught it to twenty-seven disciples, resulting in the creation of the Yajurveda’s numerous branches. Yajnavalkya stood out among these twenty-seven for his brilliance, great piety, and obedience to his Guru, Vaishampayana.

Once upon a time, Vaishampayana Vyasa accidentally killed his nephew, committing the sin of Brahmahatya (murder of a Brahmin). He instructed his disciples to perform the penance necessary for seven days in order to atone for his sin. Yajnavalkya argued vehemently to be allowed to perform the penance alone, infuriating Vyasa, who found his tone disparaging of his other disciples. An enraged Vaisampayana begged Yajnavalkya to return everything he had learned from him and leave the ashrama. Accepting the instructions, Yajnavalkya vomited the Yajurveda he had learned from Vyasa. Due to the sacred nature of the Veda, Vaisampayana did not want the vomit to fall to the ground and instructed the other disciples to disguise themselves as partridges (tittiri) and consume it. As the Vedas emerged from Yajnavalkya’s mouth, these pupils in the form of the tittiri birds swallowed them up. Because the tittiri birds devoured Vyasa’s Yajurveda, this version of Yajurveda became known as Taittiriya. Due to the fact that it manifested as black vomit, it was also dubbed Krisha (black) Yajurveda.

Yajnavalkya then resolved to never have another man as his guru. He devoted himself to worshipping the Sun God in order to reclaim the knowledge of Yajurveda. He requested Sun to teach him all aspects of the Yajurveda that his guru, Vaishampayana, was unaware of. The Sun god granted his wish and taught him the Yajurveda in the form of a horse. While Vaishampayana taught him the Krishna Yajur Veda with the Samhita and Brahmana sections mixed together, Surya taught him the Yajur Veda with the Samhita clearly separated. The Shukla Yajurveda is a version of Yajurveda that was revealed by the Sun. Due to the fact that Sun revealed it to Yajnavalkya in the form of a Vaja, or horse, this Shakha of the Shukla Yajur Veda is also known as Vajasaneyaka.

Yanjavalkya is believed to have lived in the eighth or seventh centuries BCE. He is believed to be a Kosala native (part of Uttar Pardesh). Though the name Yajnavalkya is derived from the word yajna, which means ritual, Yajnavalkya was referred to as “a thinker, not a ritualist.”

In the Brihadaranyaka Upanishad, a series of dialogues implies that Yajnavalkya has two wives: one Maitreyi, who challenges Yajnavalkya with philosophical questions in the manner of a scholarly wife, and another Katyayani, who remains silent but is mentioned as a housewife. While Yajnavalkya and Katyayani lived in contented domesticity, Maitreyi studied metaphysics and engaged in theological dialogues with her husband, in addition to “making introspective self-inquiries.” Unlike the Brihadaranyaka Upanishad, the epic Mahabharata describes Maitreyi as a young beauty who is an Advaita scholar but never marries.