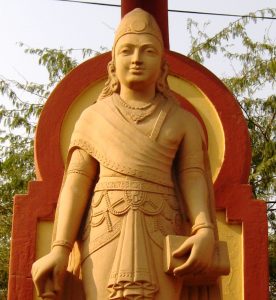 The accession of the Chandragupta Maurya to the throne of Magadha in 321BC marks the beginning of the Mauryan dynasty under whose rule the Magadhan empire reached the apex glory.  The determination the caste of the ruling dynaties has attracted the attention of historians while writing ancient Indian history. Most Historian agree on assigning either a low cxaste or a tribal origin of the Maury family.

According to the Brahmanical tradition, Chandragupta Maurya, the founder of the Maurya dynasty was born of Mura, a Shudra woman in the court of the last Nanda king. From her the dynasty known as Maurya. But the Buddhist tradition says that the Chandragupta was a member of the Moriya Kashtriya clan of Pipphalivana. The tradition thus suggets that the Moriya clan was linked to the Sakya tribe to which Gautma Buddha belonged. This implies that the Mauryas in some sense, were Kshatriyas. The Maurya title of the Chandragupta’s family is said to have been derived from the Moriya tribe.

Few also suggest that the Gupta in the Chandragupta’s name and the later episode of ashoka’s marriage to the daughter of a merchant of Vidisha lend credence to the Vaisya origin of Mauryas.