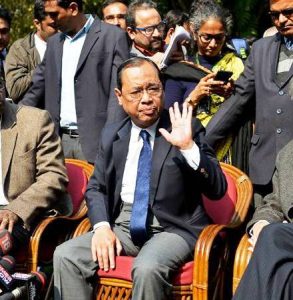 Kautilya said in the Arthashastra, that during that time, when judges delivered a judgment, they did so in an open court which means public had access to those judgments. A PIL was sought in the Supreme Court under Article 32 for live streaming of Supreme Court cases of national importance that impact the public at large and aims to further the principle of access to courts. Indian legal system is built on the concept of open courts. But in reality only a handful of people can be physically present and are allowed in the courtroom

1. The Supreme Court had already passed an order in Pradyuman Bisht v. Union of India (2017) directing all High Courts to ensure CCTVs and audio and video recordings in subordinate courts.

2. Justice should not be only done but seen to be done too.

3. Right to be informed under Article 19(1) (a) of the Constitution needs to be protected.

4. It will increase transparency.

5. Countries in other jurisdictions like Canada, South Africa etc already have live proceedings.

6. It will be in public interest since people need to know the issues that affect them like Aadhaar, Sabarimala Temple entry case, environmental pollution etc.

7. It will restore the faith of the public in the judiciary.

8. It is the age of technology and it should be harnessed to the maximum.

9. Live proceedings will prevent the faulty reporting of facts and public can decide for themselves.

10. Rajya Sabha and Lok Sabha have been doing live proceedings since long.

11. Live proceedings can also be used as an educational resource like RSTV and Lok Sabha TV is useful for researchers and UPSC and State civil services aspirants.

12. The common people will be aware regarding the working of the judiciary.

13. Many people cannot come in person to the court due to several reasons like disabilities, socio-economic conditions etc. Hence live proceedings will be helpful to this disadvantaged category of people.

14. There have been several controversies with judiciary recently and hence with live proceedings this will be taken care of.

15. Public can be able to see the proceedings for example before the International Court of Justice in the case concerning former Indian Navy Officer Kulbhushan Jadhav, who was sentenced to death by a Pakistani Military Court.

1. It will involve a heavy financial and infrastructure investment.

2. Other countries like Canada, South Africa, New Zealand etc do not have same legal system like that of ours.

3. There is huge pendency of cases in India which is not so in other countries.

4. Judges will be scrutinized and will come in public eyes.

6. Here in India, lawyers and judges rely more on oral culture rather than written briefs.

7. Indian Judiciary is already and has been always under a lot of pressure.

8. Judiciary is an independent organ and not accountable to the people. It works on the basis of Rule of Law and interprets the Constitution.

9. The normalcy of the proceedings will be affected.

11. Constitutional debates are technical in nature hence ordinary common man might not be able to comprehend it.

12. There will be a lot of public debate.

13. Lawyers will try to publicize themselves.

14. The lawyers also need to face the public then rather than only the judges. This will consume a lot more time.

1. The family, criminal matters and private matters can be kept aside and should not be done in live proceedings.

2. Matters of public issues and interest should be made public to the people.

3. Alternate Video recordings can be kept.

4. A press officer can be kept to who summary of judgments can be given so that it is propagated to the public.

5. The video recordings can be used for appeals and revision.

6. There has to be a greater reliance on written briefs, time limits for oral arguments, and a greater emphasis on preparation in advance before opting for live proceedings.