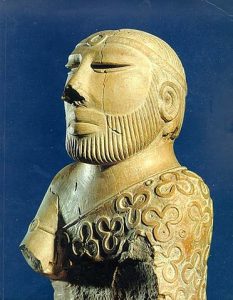 The Sumerian texts refer to two intermediate stations: Dilmun (Bahrain) and Makan. It also refers to trade relation with Meluha- The ancient name of Indus region.

Harappan Cotton was called “Sindon” by the Greeks.

The Steatite was used in seals manufacturing.

The origin of Swastika is discovered from the Indus Civilization.

Susa are the Mesopotamian places where Harappan seals were found.

A community who worshiped rivers was called “Dariyapanthi” in Indus civilization.

The Indus scripting style was popularly known as “Boustrophedon”. It is written from right to left and then left to right.

The possible traces of Sati system is found in Lothal. Here we have been found Joint Burial.

There was not found any traces of coins of Indus Valley Civilization. Probably Barter had been the method of exchange of goods.

The Harappan did not worship their gods in temple. They also do not worship the cow as we do today. They worshipped Matridevi Shakti, Yobi, Pashupati, Lingam, Naga, Trees (Peepal and Acacia), Humped Bull, the Sun and the Water, etc. They beleived in paganism and sacrificed animals in religious manufacturing.

Indra, the commander of the Aryans, is accused of causing the decline of the Harappan Civilization. The Battle of Hariyumpia (in Rigveda) has been identified with Harappa.