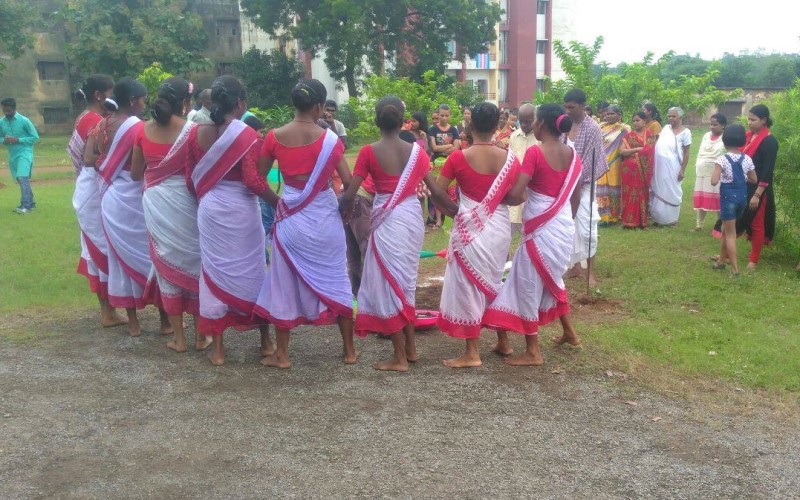 Sadans are the original non-tribal people of Jharkhand, but not all non-tribes are Sadans. The word ‘Sadan’ means people who were setteled here or inhabited the place. In the Sadani language, the house pigeon in Nagpuri is called ‘Sad Parewa’ and the wild pigeon or the pigeon that does not live in the house is called ‘Ban Parewa’. Similarly, the Sadan should be treated as ‘Sad Perewa’. There is a fundamental difference between the Adivasis and the Sadans, where the Adivasis are tribes, the Sadans are communities. The Adivasis are nomadic, while the Sadans form permanent residences.

In terms of language, a non-tribal person whose language is basically Khortha, Nagpuri, Panchapargani and Kurmali is the Sadan. In this regard, Dr. B.P. Kesari believes that the original form of these languages must have developed in different tribes of Nagajati. But language is not limited to caste only. Therefore, Nagaraja will be in Nagadishum. So as people, there will be no hag people?, people of other castes and languages will also be there.

Hindu is the ancient Sadan in terms of religion. Islam originated in the sixth century. The Jainism before it is also Sadan. Today the mother tongue of all these religious people is not Jain, Urdu or Arabic, or Persian but Khoratha, Nagpuri, Panchpargania, Karmali, etc. Whether the person is of any religion, the person can be a Sadan only when his mother tongue is Saadri.

Sadan in term of Race

Sadan is an Aryan in terms of race. Some Dravidians are also called Sadans. Even some Aryan people are Sadans. There were the Diwan, Thakur, Pandey, Karta and Lal among the fourfive pillars in the Pariha Panchayat of Uraon and Mundas. The Manki Munda, Pahan, Mahato belonged to their pegs, there were also Lal, Pandey, Thakur, Diwan, etc. as assistants, who ran the business. That is to say. Sadan always lived with Munda and Oraon in the royal system or in other bussiness activities

Origin of Sadan and Brief History

HIstory says, there was a descent species here before Asura. Certainly, these civilized species belonged to the Sudans, who were originally inhabitants. After all, the works of making iron for Asuras was done by someone else only. The Asuras were followed by Munda and then Uraon. Sudan was inhabited before their arrival. Munda and Uraon welcomed by the Sudans. The British succeded in imposing the surname Diku under a conspiracy policy, which confused the tribals and the Kol rebellion of 1831-32, in which the Sudans and Adivasis clashed. Later Biesa Munda understood this British conspiracy and he had targeted only British. In the Birsa era, the Mughal, Pathan, Sikh, Kirani babu and British were called Diku, who used to exploit the tribals and create difference between them and the houses.

Similar castes in Jharkhand which are also present in other parts of the country like Brahminsm Rajputs, Mali, Kumhars, Kurmi, Sonar, Baniya, Dom, Ahir, Chamar, Dushadh, Thakur, and Nagajati, etc.

There are many Sada castes, whose gotras are Avadhiya, Kanaujia, Tirhutiya, Gaur, Dakhinaha, etc. This shows that their original place is somewhere outside.

The cultural structure of the Sadans and Adivasis is almost same. The cultural structure of the Sadan family is mostly like that of the Sanatani family, but many social, religious and cultural functions are performed like tribals, such as weding, festival, dance0song, language, etc. Both Sadan and Adivasi are native to Jharkhand. They have shared culture. Due to this, there is a glimpse of Aryapan as well as tribalism in the houses.

The caste located in a small area called Sadan Sarak is influenced by Jainsim. Like the Jains, they do not eat after sunset and do not consume meat and fish. These people are worshippers of the sun with intent. Some Sadans are influenced by the Vaishnava tradition. Along with worshipping the deities of the Hindus, the Sadan people also worship deity. Along with Ojha Mati, witchcraft and ghost are also popular. It would be relevant to say that the religious tradition of the sadans is entrenched calling in the spirits priesthood and ritualism.

The Sadan people use jewellery ware in Bengal and Bihar. Jewellery like pola, sankha, bracelet, nettle, necklace, clavicle, sikari, chhchi, bullak, basar, nathiya, tarki, karan, fool, etc. are prevalent. Tattooing is also practised in the houses like that of the tribals.

Sadan people use earthenware in villages. Handia, gagri, chukka, dhakni are definitely visible in the houses. Keeping brass and bronze utensils in the houses is considered a sign of prosperity. Both sides of the plate are used in group meals. Sadan and adivasi use the same equipment in farming.

Sadans use nets, kumani bansidong, polai and tools like arrow-bows, swords, spears, lathis, tongs, etc. for hunting, just like tribals. The tradition of holding guns by the Sadans came due to Zamindari.

The festivals of Sadans are a very big basis of identity. A person who is not a Sadan will not enjoy the festivals here. Holi, Diwali, Sussehra, Kali-puja, Jitiya, Sohrai, Karma, Sarhul, Makar Sankranti, Tusu, Teej, etc. are the major festivals of the houses. Muslims celebrate Eid, Muharram, etc.

Dance and Song of Sadans

Houses are identified with the village of Akhara. The collective dance of girls takes place in Akhara in Karma Utsav. There is an overnight dance to awaken Java. Apart from this, women also dance in marriage. Dumkach, jhumta, Jhumar, etc. are all group dances. Ghatwari dance, Jamda dance, Chokra dance, Santhal dance, Luri Savari dance, Rajput Jhalak dance—all these dances together are called colourful or MALE dance. Apart from this, Ganesh dance, Karthik dance are called classical dance.

The songs of the Sadans are named after their raga and sur. Such as Dumkach, Jhumta, Agnayi, Sohar, Mardani Jhumar, Sohrai, etc.

Sadan is also a contemporary of the tribals, who are native of Jharkhand. Seeing the mutual friendship between the tribals and the Sadans, the British tried to create a rift between them. They got partial success in this. The British used the term Diku for then in Jharkhan.