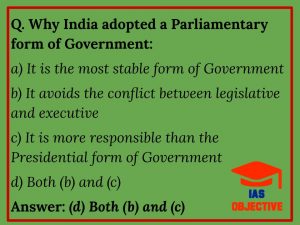 Explanation: Statement (a) is incorrect as the Parliamentary form of Government does not provide a stable government. There is no guarantee that a government can survive its tenure. the tenure of Government depends on the mercy of the majority legislators. A no-confidence motion or political defecation or evils of the multi-party coalition can make the Government unstable.

According to Laxmikanth followings are the reason behind the adoption of Parliamentary form of Government in India:

1. Familiarity with the System: The Constitution-makers were somewhat familiar with the parliamentary system as it had been in operation in India during the British rule. K M Munshi argued that ‘For the last thirty or forty years, some kind of responsibility has been introduced in the governance of this country. Our constitutional traditions have become Parliamentary. After this experience, why should we go back and buy a novel experience.’

3. Need to Avoid Legislative—Executive Conflicts: The framers of the Constitution wanted to avoid the conflicts between the legislature and the executive which are bound to occur in the presidential system prevalent in the USA. They thought that an infant democracy could not afford to take the risk of a perpetual cleavage, feud or conflict or threatened conflict between these two organs of the government. They wanted a form of government that would be conducive to the manifold development of the country.

4. Nature of Indian Society: India is one of the most heterogeneous States and most complex plural societies in the world. Hence, the Constitution-makers adopted the parliamentary system as it offers greater scope for giving representation to various section, interests, and regions in the government. This promotes a national spirit among the people and builds a united India.