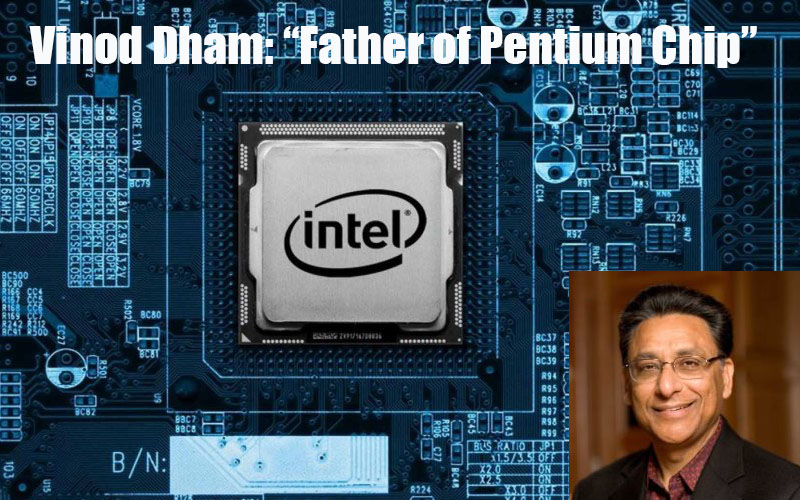 4. Who was associated with the creation of Pentium Chip ?
a) Arun Netravalli
b) Sabeer Bhatia
c) C. Kumar Patel
d) Vinod Dham

10. Who is the father of cellular phone ?
a) Linus Torvalds
b) Percy Lebaron Spencer
c) Fred Morrison
d) Martin Cooper

1. (b) An optical fiber (or optical fibre) is a flexible, transparent fiber made of glass (silica) or plastic, slightly thicker than a human hair. It functions as a waveguide, or “light pipe”, to transmit light between the two ends of the fiber. The field of applied science and engineering concerned with the design and application of optical fibers is known as fiber optics. Optical fibers are widely used in fiber-optic communications, which permits transmission over longer distances and at higher bandwidths (data rates) than other forms of communication. Narinder Singh Kapany is an Indian born American physicist who invented optical fibre.

2. (d) Radar is an object detection system which uses radio waves to determine the range, altitude, direction, or speed of objects. It can be used to detect aircraft, ships, spacecraft, guided missiles, motor vehicles, weather formations, and terrain. The radar dish or antenna transmits pulses of radio waves or microwaves which bounce off any object in their path. In 1922 A. Hoyt Taylor and Leo C. Young, researchers working with the U.S. Navy invented Radar.

3. (d) An automobile, motor car or car is a wheeled motor vehicle used for transporting passengers, which also carries its own engine or motor. The term motorcar has also been used in the context of electrified rail systems to denote a car which functions as a small locomotive but also provides space for passengers and baggage. Although several other German engineers (including Gottlieb Daimler, Wilhelm Maybach, and Siegfried Marcus) were working on the problem at about the same time, Karl Benz generally is acknowledged as the inventor of the modern automobile. In 1879, Benz was granted a patent for his first engine, which had been designed in 1878. Many of his other inventions made the use of the internal combustion engine feasible for powering a vehicle.

4. (d) Vinod Dham is an inventor, entrepreneur and venture capitalist. He is popularly known as the
Father of the Pentium chip, for his contribution to the development of highly successful Pentium Processors from Intel. He is a mentor, advisor and investor; and sits on the boards of many companies including promising startups funded through his India based fund – Indo US Venture Partners, where he is the founding Managing Director.

5. (b) A videotape is a recording of images and sounds on to magnetic tape as opposed to film stock used in filmmaking or random access digital media. Videotapes are also used for storing scientific or
medical data, such as the data produced by an electrocardiogram. Charles P. Ginsburg invented the videotape. He worked for Ampex, and was inspired by the reel-to-reel machines used for recording sound.

6. (c) A laser is a device that emits light (electromagnetic radiation) through a process of optical amplification based on the stimulated emission of photons. On May 16, 1960, Theodore H. Maiman operated the first functioning laser, at Hughes Research Laboratories, Malibu, California, ahead of several research teams, including those of Townes, at Columbia University, Arthur Schawlow, at Bell Labs, and Gould, at the TRG (Technical Research Group) company.

7. (a) There are many claimants to the title of the first company to produce practical transistor radios, often it is attributed to Sony (originally Tokyo Telecommunications Engineering Corporation). A transistor radio is a small portable radio receiver that uses transistor-based circuitry. Following their
development in 1954 they became the most popular electronic communication device in history, with
billions manufactured during the 1960s and 1970s. Their pocket size sparked a change in popular music listening habits, allowing people to listen to music anywhere they went.

8. (b) The oral polio vaccine (OPV) was developed in 1961 by Albert Sabin. Also called “trivalent oral polio vaccine” or “Sabin vaccine”, OPV consists of a mixture of live, attenuated (weakened) poliovirus strains of all three poliovirus types. OPV produces antibodies in the blood to all three types of poliovirus. In the event of infection, these antibodies protect against paralysis by preventing the spread of wild poliovirus to the nervous system.

9. (a) Voice-mail (also known as voicemail, voice message or voice bank) is a computer based system that allows users and subscribers to exchange personal voice messages; to select and deliver voice information; and to process transactions relating to individuals, organizations, products and services, using an ordinary telephone. Voicemail systems were developed in the late 70’s by Voice Message Exchange (VMX). They became popular in the early 80’s when they were made available on PC-based boards. Voice mail was the brainchild of Gordon Mathews, a successful entrepreneur who held 35 US and foreign patents at the time of his death on February 23, 2002.

10. (d) Martin Cooper (born December 26, 1928 in Chicago, Illinois, USA) is an American former Motorola vice president and division manager who in the 1970s led the team that developed the handheld mobile phone (as distinct from the car phone). Cooper was also the CEO and founder of ArrayComm, a company that works on smart antenna technology and wireless networks, and was the corporate director of Research and Development for Motorola. In 1973, when Motorola installed a base station to handle the first public demonstration of a phone call over the cellular network, the company was trying to persuade the Federal Communications Commission to allocate frequency space to private companies for use in the emerging technology of cellular communications. After some initial testing in Washington for the F.C.C., John F. Mitchell and his team, which included Martin Cooper, took the cellular phone technology to New York to demonstrate it to reporters and the public.

OBJECTIVE IAS is the First Institution in Odisha to provide Online Coaching for Students Preparing Odisha Civil Service Examination, popularly known as OAS Exam. It was founded in 1st January 2015.

OBJECTIVE IAS is the First Institution in Odisha to provide Online Coaching for Students Preparing Odisha Civil Service Examination, popularly known as OAS Exam. It was founded in 1st January 2015.