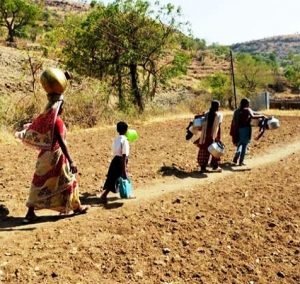 The decline has been most significant in Empowered Action Group (EAG) states — Bihar, Jharkhand, Madhya Pradesh, Chhattisgarh, Odisha, Rajasthan, Uttar Pradesh and Uttarakhand — and Assam, from 246 to 188. Among the southern states, the decline has been from 93 to 77 and in the other states from 115 to 93.

Maternal mortality is defined as the death of a woman while pregnant or within 42 days of termination of pregnancy, irrespective of the duration and site of the pregnancy, from any cause related to or aggravated by the pregnancy or its management but not from accidental or incidental causes.

As a step further in direction and keeping in view the criticality of water for life, NITI Aayog has prepared a report on Composite Water Management Index (CWMI).

The report released ranks Gujarat as number one in the reference year (2016-17), followed by Madhya Pradesh, Andhra Pradesh, Karnataka and Maharashtra. In North Eastern and Himalayan States, Tripura has been adjudged number 1 in 2016-17 followed by Himachal Pradesh, Sikkim and Assam.

In terms of incremental change in index (over 2015-16 level), Rajasthan holds number one position in general States and Tripura ranks at first position amongst North Eastern and Himalayan States. NITI Aayog proposes to publish these ranks on an annual basis in future.

NITI Aayog has come up with the Composite Water Management Index as a useful tool to assess and improve the performance in efficient management of water resources. This index is an attempt to inspire States and UTs towards efficient and optimal utilization of water, and recycling thereof with a sense of urgency.

The index would provide useful information for the States and also for the concerned Central Ministries/Departments enabling them to formulate and implement suitable strategies for better management of water resources.

The world’s first International Centre for Humanitarian Forensics (ICHF) was launched on 20 June 2018 in Gujarat, India by the Gujarat Forensic Sciences University (GFSU) in collaboration with the International Committee of the Red Cross (ICRC) Regional Delegation for India, Bhutan, Nepal and the Maldives.

ICHF is the first definitive effort at institutionalising humanitarian forensic action within an existing university system. The Centre will conduct various academic and professional programmes, training, research and provide technical expertise to support operations (together with authorities and agencies concerned) in the field of humanitarian forensics. It is envisioned to be the one-stop centre of excellence in Asia for global high quality and sustainable capacity building, research and innovative projects that will underpin operational responses for humanitarian forensic purposes in relevant contexts.

With the government sparing just 1.3 per cent of the GDP for public healthcare, way less than the global average of 6 per cent, there remains a severe scarcity of doctors in the country and people continue to incur heavy medical expenditure across rural and urban hospitals.  These are among the grim facts recorded in the National Health Profile 2018, an annual report released recently by the Central Bureau of Health Intelligence (CBHI)

According to the report, one allopathic government doctor in India, on an average, attends to a population of 11,082, which is 10 times more than the WHO recommended a doctor-population ratio of 1:1,000. The situation is worst in Bihar where one doctor serves a population of 28,391 people. Uttar Pradesh is ranked second with 19,962 patients per doctor, which is followed by Jharkhand (18,518), Madhya Pradesh (16,996), Chhattisgarh (15,916) and Karnataka (13,556). Delhi is better in terms of doctor-population ratio amongst other states, where the ratio stands at 1:2203, which is still twice the recommended ratio by WHO.

The NHP report reflects the consistent indifferent approach of the government in terms of public health spending. The report states the country spent only 1.02 per cent of its GDP on healthcare in the financial year 2015-16. It also says that the per capita public expenditure by the government on health stands at Rs 1,112 that comes to Rs 3 per day.

This dismal figure puts India below other low-income nations like Maldives (9.4), Bhutan (2.5), Sri Lanka (1.6) and Nepal (1.1). Globally, Sweden spends the largest chunk on public healthcare by dedicating 9.2 per cent of its GDP.

With rabies having a 100 per cent fatality rate amongst 97 cases reported in the year, it remained one of the most lethal communicable diseases in the country for the year. The highest figure of deaths due to rabies was reported from West Bengal (26) and Karnataka (15).

Japanese Encephalitis (JE), a kind of an infection of the brain caused by the JE virus, continues to claim lives with 12 per cent mortality rate amongst 2,180 cases. The maximum number of cases (693) of JE and death (93) were reported from Uttar Pradesh, the highest since 2013.

NDL is the Single Window Platform that collects and collates metadata from premier learning institutions in India and abroad, as well as other relevant sources. It is a digital repository containing textbooks, articles, videos, audio books, lectures, simulations, fiction and all other kinds of learning media.

The government of India has launched Swajal scheme to ensure there is a steady supply of clean drinking water in rural areas. These remote rural areas usually receive contaminated and harsh water which, on consumption, has led to many illnesses.

The Ministry of Drinking Water and Sanitation has launched the Swajal scheme in around 115 rural districts in India to provide clean drinking water. It will involve an outlay of Rs 700 crore through flexi funds under existing National Rural Drinking Water Programme (NRDWP) budget.

What is the Swajal scheme?

This Swajal scheme was launched by the government for sustained water supply in rural areas. 90 per cent of this project is funded by the government and 10 per cent is funded by the beneficiary communities. The management of this operation is managed by local villagers and hundreds of technicians will be trained under this scheme to maintain and operate the units. All the villages will get water supplied through fitted pipes. This will ensure that the water is not contaminated. The maintenance of these pipes will be taken care of by the technicians.

The government has chosen 115 rural districts which will receive rapid transformation to match up to government’s vision of ‘New India’. The selection criteria of these districts are dependent on six socio-economical parameters, according to Niti Aayog. The parameters are health and nutrition, education, financial inclusion and skill development, agriculture and water resources and basic infrastructure. 35 districts that face Left Wing Extremist (LWE) violence and 15 districts from Jammu and Kashmir which experience terrorism are included in this scheme. Government aspired to bring technological change in these districts as well and transforming them rapidly to develop the nation further. Around 2 lakh people die in India every year because of the immense water shortage and 600 million people of this country don’t have access to clean drinking water.

7. Indian Army to observe 2018 as year of Disabled Soldiers in Line of Duty

To honour soldiers who have been disabled in line of duty, while serving the Nation and to celebrate the undying spirit of ‘Soldiering’, Indian Army is observing the year 2018 as the ‘Year of Disabled Soldiers in Line of Duty’. The primary focus is towards alleviating the sufferings of these soldiers, who have done their duty with utmost dedication to the Nation and have been disabled for the life.

The endeavour this year is to provide a onetime financial assistance to disabled soldiers who have been boarded out from service on medical grounds and are rendered non-employable due to their medical or physical conditions.

Commerce and Industry Minister Suresh Prabhu launched a mobile application ReUnite  to trace missing and abandoned children in India. “This effort to reunite parents whose children have gone missing is a wonderful use of technology to address real life social challenges,” he said. The app is multiuser where parents and citizens can upload pictures of children, and provide detailed description like name, birth mark, address, report to the police station, search and identify missing kids.

The photographs will not be saved in the mobile phone’s physical memory. Amazon Rekognition, web facial recognition service, is being used to identify missing kids, according to a statement by the commerce ministry. The app is available for both Android and iOS. Non-government organisation Bachpan Bachao Andolan and Capgemini has developed this app.

Appreciating the role of the MSME sector in leveraging the demographic dividend of the country and promoting inclusive growth in rural and backward areas, Ram Nath Kovind pointed out that the sector accounted for around 60 per cent employment in India.

According to a survey, there are about 6.5 crore MSMEs in India which have created over 11 crore job opportunities. Such enterprises have registered over 10 per cent growth in recent times which is much more compared to large enterprises. Last year, the UN General Assembly had declared June 27 as MSME Day, recognising the importance of the sector in achieving sustainable development goals and in promoting innovation, creativity and sustainable work for all.

The Solar Charkha Mission will entail a subsidy of Rs 550 crore in the initial two years for 50 clusters and every cluster will employ 400 to 2000 artisans. The mission will generate employment in rural areas and contribute to the green economy.