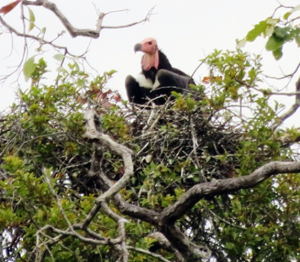 Some polar bears in the Arctic are shedding pounds during the time they should be beefing up, a new study shows. It’s the climate change diet and scientists say it’s not good. They blame global warming for the dwindling ice cover on the Arctic Ocean that bears need for hunting seals each spring.

For their research, the scientists spied on the polar bears by equipping nine female white giants with tracking collars that had video cameras and the bear equivalent of a Fitbit during three recent springs. The bears also had their blood monitored and were weighed.

Polar bears hunt from the ice. They often wait for seals to pop out of holes to get air and at other times they swim after seals. If there is less sea ice and it is broken apart, bears have to travel more — often swimming — and that has serious consequences, such as more energy use, hypothermia and risk of death, said University of Alberta biology professor Andrew Derocher, who wasn’t part of the study.

The study found that on the ice, the polar bears burn up 60 percent more energy than previously thought, based on these first real-life measurements done on the ice. A few of the bears travelled more than 155 miles (250 kilometers) in about 10 days off the northern coast of Alaska in the Beaufort Sea, Pagano said. The average bear female burned about 13,200 calories a day — six times more than an active human female.

Air pollution not only affects your health but may also lead to unethical behaviour such as crime and cheating, researchers have warned. A combination of archival and experimental studies indicated that exposure to air pollution, either physically or mentally, is linked with unethical behaviour. The experimental findings suggest that this association may be due to increased anxiety.

The researchers found that the cities with higher levels of air pollution also tended to have higher levels of crime. This association held even after the researchers accounted for other potential factors, including total population, number of law enforcement employees, median age, gender distribution, race distribution, poverty rate, unemployment rate, unobserved heterogeneity among cities and unobserved time-varying effects. To establish a direct, causal link between the experience of air pollution and unethical behaviour, the researchers also conducted a series of experiments.

Flowering plants may have originated between 149 and 256 million years ago, according to a study published today. Researchers found that flowering plants are neither as old as suggested by previous molecular studies, nor as young as a literal interpretation of their fossil record. The discrepancy between estimates of flowering plant evolution from molecular data and fossil records has caused much debate. The researchers compiled a large collection of genetic data for many flowering plant groups including a dataset of 83 genes from 644 taxa, together with a comprehensive set of fossil evidence to address the timescale of flowering plant diversification. Through the lens of the fossil record, flowering plants appear to have diversified suddenly, precipitating a Cretaceous Terrestrial Revolution in which pollinators, herbivores and predators underwent explosive co-evolution.

Molecular-clock dating studies, however, have suggested a much older origin for flowering plants, implying a cryptic evolution of flowers that is not documented in the fossil record. Palaeontological timescales calibrate the family tree of plants to geological time based on the oldest fossil evidence for its component branches. Molecular timescales build on this approach, using additional evidence from genomes for the genetic distances between species, aiming to overcome gaps in the fossil record.

The air quality in India’s cleanest towns does not meet the World Health Organisation (WHO) standards, according to a Greenpeace India report.

With an annual reading of 26 µg/m3, the temple town of Hassan in Karnataka, hilly Pathanamthitta in Kerala, or Nongstoin in the West Khasi Hills of Meghalaya have the least particulate matter in air in the country, but are still higher than the 20 µg/m3 annual mean safe level recommended by the WHO, Greenpeace India report, Airpocalypse-II says.

Following these cities are Darjeeling (29) in West Bengal and Tura (30) in Meghalaya, as per 2016 data available for 280 cities. Around 550 million people live in places where PM10 exceeds the standards, with 180 million of them living in areas with PM10 double the permissible standards.

Three nests of the critically endangered red-headed vulture were found in Chhep Wildlife Sanctuary in Cambodia, the US-based Wildlife Conservation Society (WCS) has said. The population of this species is possibly less than 50 in Cambodia. These nest discoveries give hope that conservation efforts may save this species from extinction. Global vulture populations are declining at an alarming rate.

Cambodia’s three vulture species red-headed, slender-billed and white-rumped – are all listed on the International Union for Conservation of Nature (IUCN) Red List as critically endangered, indicating a very high risk of extinction in the wild. Cambodia supports the largest population of vultures in Southeast Asia, but there are only a few hundred vultures left in the country, say experts.

India is home to four critically endangered vulture species – the red-headed, white-rumped, long-billed and slender-billed; two near threatened species – bearded and Himalayan griffon; and one endangered – the Egyptian vulture. The cinereous vulture, a wintering migrant to India from Europe, is also facing the threat of extinction.

BNHS (Bombay Natural History Society) attributes the decline of these scavenging birds that help in maintaining the ecological balance in the nature to the extensive use of diclofenac in treating cattle. The vultures that consumed the carcasses of animals treated with diclofenac died with symptoms of kidney failure. As part of SAVE (Saving Asia’s Vultures from Extinction), the BNHS is breeding endangered vulture species in captivity in three centres in India. It’s also later planning their reintroduction into the wild. Similarly, as part of the Bird’s Nest Protection Programme, the WCS has employed six community members to protect the nests of these vultures.